Wearing the uniform of the 78th Regiment of Foot (Fraser's Highlanders) the unit trains year round in the use of the Brown Bess musket, period foot drill and highland fencing, as well as acts as a Guard of Honour during special ceremonies and events. It also attends participates in community parades, festivals, and cultural events providing demonstrations of 18th century military drill and musketry.

Lead by David Desjardins CD, a retired member of the Canadian Forces, with an equal love for Canadian military history, foot drill, and instructing. He strives to bring new, and dynamic ways to teach history to young Canadians while instilling them with principals of leadership, responsibility and dedication.

We are always recruiting for our Musket team. It is open to both men and women (min 12 yrs. old) with an interest in history, music, theater. One need not be of Scottish heritage to be a member of our organization.

All of the necessary equipment including the uniform and musket is provided.

The 78th Fraser Highlanders parade with the Brown Bess musket, the weapon which holds the record for being used the longest in British history, more than 150 years.

The drill sequence to load the musket was taken from a 1757 manual entitled The New Highland Military Discipline by George Grant, an original copy of which is in the Museums library. It is an elegant drill which has the soldier load and fire his musket in 27 movements -opening the cartridge, filling and closing the pan, loading the barrel with the powder and ball (not used now!) and ramming the charge home with the ram rod. Once the musket is returned to the firing position, it is cocked, aimed and fired.

In the Frasers performance, the first volley is executed to the commands of the Officer. The second volley is prepared to the beat of the drum only, and the officer gives the final commands only. The third and fourth rounds are executed by each soldier individually as fast as possible, as if in a hectic non-traditional battle situation. The loud bangs, billowing smoke, and pipes & drums give a small glimpse of what battle scenes looked like 200 years ago.

Once all firing has ceased, bayonets are placed on the muskets, and the squad performs the bayonet charge movements, in place. The fierceness of this movement would put a fright into any enemy

Many years of research have gone into refining the uniform worn by the Regiment in North America. Since no cloth part of the uniform is known to exist, patterns have been developed based on portraits, accounts and existing clothing from other Regiments. The Regiment was raised and shipped to North America within a few weeks, so simplicity and availability were key factors. Uniformity, as we know it today, was also not strictly enforced. There was a great deal of individuality, especially with the Officers.

The tartan worn by the Regiment has been an object of discussion throughout the years of research. Many believe that the Government Tartan (known as the Black Watch) would have been the only tartan available in large enough quantities and that it would have been the only officially endorsed pattern. Our decision to go with a simple red and green Inverness district type tartan was based on portraits and accounts, and having found a piece of this tartan in the possession of a descendent of the Regiment.

The squad uses reproduction period rope tension drums, some made by the same supplier as two hundred years ago, Henry Potters and Sons, London. With calfskin heads and the newly added snares on the bottoms, the sound is loud and deep compared to modern drums. 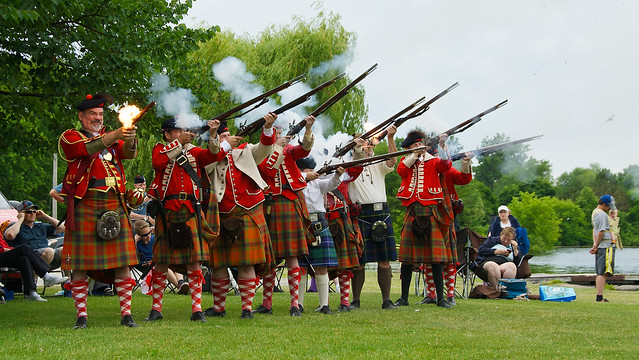 A Little Fun for the Kids

Download the Word document to print and cutout your own troops. Reenact your favourite battles. For additional figures for the French Indian War, and lots more, be sure to stop by Junior General dot Org